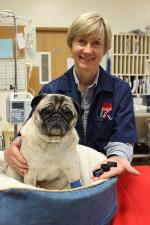 Bertuzzi, like most Pugs is normally an energetic, perpetually hungry and somewhat mischievous fellow. As fate would have it, over 2 months ago Bertuzzi and his two human (young boys) family members were playing with a new lego set. Unfortunately “Bert” found the black car tires interesting and tasty too, so he ate three of them.

Many dogs/pups and some cats will swallow objects that they shouldn’t. Thankfully many of these objects (we call foreign bodies) are either thrown up or are passed in the stool. Some objects, like the rubber toy tires Bertuzzi ingested can remain in the stomach for weeks to months. However if and when the object exits the stomach and travels down the intestines a blockage can occur. This is what happened to our unfortunate friend Bertuzzi. He seemed fine in the morning but later began to vomit throughout the day.

Bertuzzi was examined at our hospital by Dr. Armstrong later that evening as he was unable to keep any food or water down. Although his family did not know of anything unusual that he had eaten recently, this was always a possibility for Bert. He was not his normal exuberant self, but he was still quite bright, and was not particularly painful on palpation of his abdomen (belly), nor did he have a fever. We made a decision to draw blood that evening, give him some medication to reduce nausea and vomiting and send him home for the night until we received the laboratory results the next morning. Unfortunately Bertuzzi did not feel any better by the morning so he returned him to the hospital.

Blood results revealed a high white blood count, an acute inflammatory response as well as a possible pancreatitis. Radiographs were taken that morning and several odd densities/“foreign bodies” were found in Bertuzzi’s gastrointestinal tract (stomach and intestines). Thus with a little rearranging of our schedule, we ensured that Bert was in surgery and his toy truck tires were removed by lunch time.

We suspect the single remaining tire in the stomach was not causing him any current problems. But the two tires that for whatever reason finally managed to leave the stomach the day before (after spending possibly over 2 months in the stomach) had caused significant swelling and inflammation of the first part of the intestine where they were eventually removed. The tires not only irritated the intestine, but also upset Bertuzzi’s pancreas as they passed through that region. No wonder he was a very sick little fellow.

Although Bertuzzi will never make the association of his tire gulping escapade with his sore belly, we hope he will make better culinary choices in the future. We know his family is happy to have him home feeling well and back to his fun filled self.