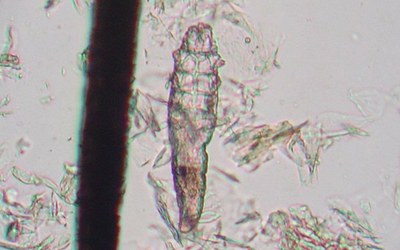 in dogs. One lives just under the surface of the skin (sarcoptic mange - see handout “Sarcoptic Mange in Dogs” for more information), while the other resides in the hair follicles (demodectic mange). Although both mites share similar characteristics, there are also important differences. It is important not to confuse the two types of mange because they have different causes, treatments, and prognoses.
Image via Wikimedia Commons / Joel Mills (CC BY-SA 3.0.)

Demodectic mange is caused by Demodex canis, a parasitic mite that lives in the hair follicles of dogs. Under the microscope, this mite is shaped like a cigar with eight legs. Demodectic mange, sometimes just called ‘demodex’ or ‘red mange’, is the most common form of mange in dogs.

"As long as the body's immune system is functioning properly, these mites cause no harm."

All normal dogs (and many humans) have a few of these mites on their skin. As long as the body's immune system is functioning properly, these mites cause no harm.

Demodectic mange most often occurs when a dog has an immature immune system, allowing the number of skin mites to increase rapidly. As a result, this disease occurs primarily in dogs less than 12 to 18 months of age. As the dog matures, its immune system also matures.

No, demodectic mange is not contagious to other animals or humans. Demodex mites are transmitted to puppies from their mother during the first few days of life. Since the mite is found on virtually all dogs, exposure of a normal dog to one with demodectic mange is not dangerous, as the immune system must be depressed for mange to develop.

"Demodectic mange is not contagious to other animals or humans."

Why doesn't the immune system mature correctly in some dogs?

What does demodectic mange do to the dog?

How is demodectic mange diagnosed?

"Your veterinarian will take deep skin scrapings and examine them under the microscope to diagnose this disease."

Your veterinarian will take deep skin scrapings and examine them under the microscope to diagnose this disease. The finding of larger than normal numbers of Demodex mites in skin scrapings confirms the diagnosis. Occasionally, the disease will be diagnosed by means of a skin biopsy in dogs that have chronic skin infections that have not responded appropriately to treatment.

How is demodectic mange treated? 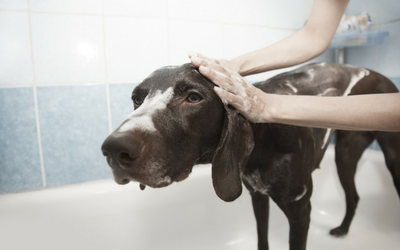 The localized form is usually treated with topical medication. The generalized form requires more aggressive treatment using special shampoos and dips, along with oral medication. Shampooing with special cleansing shampoos containing benzoyl peroxide helps to flush out and open the hair follicles prior to dipping. A separate handout is available to describe the dipping process (see handout “Demodectic Mange - Dipping Instructions for Dogs”).

There are also several 'spot on' topical treatments, such as imidacloprid and moxidectin. These medications are used 'off label' for the treatment of demodicosis. The term 'off label' describes the use of a drug for conditions other than what it was approved for.

There is an injectable form of doramectin, which can also be used for off label treatment of demodex. Your veterinarian will discuss the benefits and risks of these medications with you.

Are there any problems with topical treatment?

The dip commonly used for demodectic mange contains the insecticide amitraz. It must be used very carefully because it is a strong insecticide that can cause serious side effects, both to your dog and to you, if not used properly. Your dog may experience vomiting and sedation for twenty-four to thirty-six hours following each application. Most of these problems will resolve without medical intervention. If your dog reacts in this manner, you should dilute the next dip with 25% more water. If you are using a ‘spot on’ topical treatment, you may see drooling if your dog licks the medication.

"Amitraz must be used very carefully because it is a strong insecticide that can cause serious side effects, both to your dog and to you, if not used properly."

Since most dogs develop tolerance to the dip as they are repeated, your dog is less likely to have side effects with each subsequent treatment. After receiving two to three dipping treatments at seven-day intervals, skin scrapings should be repeated and examined for the presence of live mites or mite eggs. The results of these skin scrapings will determine whether further treatment is needed.

I heard that there is a drug that can be given orally for demodectic mange. Is that true?

Ivermectins are a class of drugs that are approved for prevention of heartworm disease in dogs and cats. Certain ivermectins are used to treat parasites on cattle. The cattle preparation has been used orally for demodectic mange in some dogs. However, ivermectin is not approved for use in treating dogs with mange, so its use to treat mite infestations in dogs is off-label.

Ivermectin is a very strong drug that can cause severe side-effects, including death, if it is not administered properly. It is extremely important to follow your veterinarian’s instructions and cautions carefully, as their directions may be very different from those on the label. Veterinarians do not generally recommend ivermectin for use in Collies, Shetland Sheepdogs, Australian Shepherds, Old English Sheepdogs, or any other herding breed because they are sensitive to the medication.

There are a few other oral medications that may be used off label in the treatment of the demodex mite. These include milbemycin oxime (the active ingredient of Interceptor® and Sentinel®), afoxolaner (NexGard®), and fluralaner (Bravecto®). Your veterinarian will help you decide which oral or topical medication is best for your dog.

What is the prognosis for my dog?

Treatment of demodectic mange is generally successful. However, if the immune system is weakened, neither the mites nor the infection may respond to treatment. With generalized demodicosis, successful treatment may take a long time, and may require regular skin scrapings to check the progress of the treatment.

Following successful treatment, is it likely to recur?

"It is important to treat as soon as a relapse occurs to minimize the possibility of developing uncontrollable problems."

Because the immune system does not mature until 12 to 18 months of age, a dog with demodectic mange may have relapses until that age. In addition, dogs with suppressed immune systems may be susceptible to relapse. It is important to treat as soon as a relapse occurs to minimize the possibility of developing uncontrollable problems. Relapses are usually recognized 3-6 months after treatment is discontinued.

© Copyright 2018 LifeLearn Inc. Used and/or modified with permission under license.